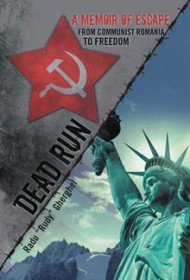 Listening to the forbidden Radio Free Europe with his grandmother while hiding in their pantry convinced 13-year-old Radu Gherghel that he would one day live in America. Using a ghostwriter, Gherghel tells an engrossing tale of his youth in Romania under Soviet rule and his dangerous escape to Europe and eventually the United States.

Gherghel never met his father, a decorated war hero killed in the battle of Stalingrad in 1942 just months before his birth, but his grandparents told him of the man and the country he’d never known, bygone days of happiness and freedom before the 1944 Soviet Occupation. Gherghel’s memoir vividly imparts the experience of living under the crushing weight of Communism, including his grandfather’s forced removal from the church he ran and eviction from the rectory that housed his family; his uncle’s arrest and disappearance, never to be heard from again; a member of the Secret Police moving in with his family, unbidden, to spy on them; and ubiquitous poverty among the masses while the Communist elite had plenty to eat, warm coats and proper shoes.

From the age of 10, Gherghel and other children were forced to work summers on state-owned collective farms, picking corn and fruit to export for cash the government used to buy “caviar and champagne for the big boys in Bucharest.” Knowing this, the workers lacked any incentive and produced as little as possible, he says. “That was the Communist way.”

By age 23, Gherghel was ready to leave the hardship and oppression. His daring, fast-paced escape is fraught with fear, deception and flying bullets.

The author and his family feel so authentic to readers that they can’t help but wonder what they would do in his situation. Gherghel comes across as an ordinary man caught up in extraordinary circumstances, and reading his memoir is a visceral, edge-of-the-seat experience.