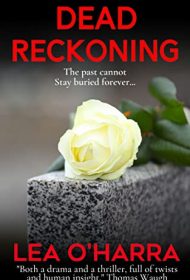 This suspense novel centers on Gilly, 38, who arrives in 2010 at her small hometown near Chicago for her mother’s funeral.  She has spent the past decade in Japan, and when she and husband Toshi return, her best friend Sally tells her ominously that “it’s happening again.”

When Gilly and Sally were 12 and 13 respectively, the girls discovered a dead baby in a shoebox in the cemetery. They secretly buried the body in Gilly’s yard; then strange things started happening. Flowers were mysteriously left in strollers; then two local children disappeared and were murdered. Although a killer confessed, there’s doubt surrounding the tragedy. Shortly before Gilly’s return, flowers started showing up again in strollers, and when another child is abducted, Gilly fears the worst.

“ ‘… I wish I was twelve again,’ Gilly thinks to herself. ‘That I could tell Sally I didn’t want to play in the cemetery…That I’d put my foot down, saying, “I hate going there, it gives me the creeps,” and walked home alone. If only I had.”

O’Harra delivers an interesting tale of intrigue as Gilly evolves from being a mousy woman (in fact, she’s nicknamed “Mouse”) in a somewhat abusive marriage to an assertive heroine who ends up saving herself as she seeks to save the missing baby.

O’Harra crafts believable characters, and her descriptive prose will draw readers in. Even minor characters are given their due. For example, of her older brother, Gilly’s notes: “The beard hides a receding chin, and my brother looks handsome in an outdoorsy way… It comes to me he’s one of those people who get better looking as they grow older, who need to try out tentative versions of themselves before settling on the right one.”

Such pithy descriptions are planted throughout, and readers will enjoy discovering whodunit clues while watching Dead Reckoning’s protagonist discover herself.