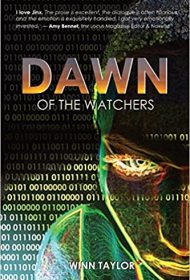 Dawn of the Watchers is the second book of Winn Taylor’s Jinx Chronicles, a young adult, metaphysical science fiction series.

As the story begins, a group of intrepid heroes take a ship from the New World Space Station and head to Earth. OI (organic intelligence) is on the brink of extinction, and Earth is empty of life. But the planet may hold the secret to saving humanity from the aliens and artificial intelligences set to wipe it out. The Great Pyramid and two others remain relatively intact and apparently hold mystical powers. Joining these powers will create a space shield that could possibly stop the destruction of organic intelligent beings.

Our heroes have an assortment of superpowers. Laris, who is destined to save humanity, has empathic powers and ability to transmute energy. Jinx, Laris’s Protector, can “blink” herself from any place in the universe to any other place instantaneously and take people and things with her. The diminutive Deedee has super strength and battle ability. Jacob, a “geeky” super-genius, can make nearly anything from whatever is lying around, including the super space shield. Claire, the ship’s doctor, can heal injuries remarkably quickly. And Hadu, a Yoda-like savant, tries to tame Jinx’s wild side with philosophical lessons.

Star Wars fans will think some of the characters stepped right out of the Mos Eisley Cantina, especially arch-villain Sartillias. Taylor has a talent for letting readers visualize her bizarre characters by having the characters describe one another, rather than through exposition. Jinx is an excellently drawn hero. Although she has been tasked with protecting humanity’s savior, it’s obvious she’s still a teenager; she sulks, rebels from authority and questions her own feelings.

Reading book one, Rise of the Protector, before Dawn of the Watchers is highly recommended, as without background knowledge, one can feel extremely disoriented initially. Still, with this familiarity or without, readers will find themselves rooting for Jinx and wondering what she will do in the next episode.