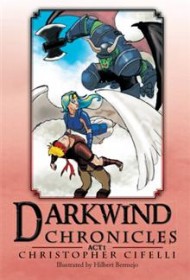 Christopher Cifelli’s intriguingly titled Darkwind Chronicles: Act I is written in the tradition of the heroic quest set in a fantasy world. It follows the adventures of Magnetin Darkwind, who is charged with facing various trials and undertaking numerous tasks, ranging from absorbing energy from an orb to venturing into a maze to find the Heart of Mother Earth and bring it back intact.

Cifelli demonstrates a very active imagination, but his weak command of writing makes his adventurous plot line very difficult to follow. The work is replete with confusing constructions and tense changes, as in: “She have the detonator set the explosives for 30 seconds and hurried over with the group as they duck for cover, using the cart as shield.” In another tense problem that runs throughout the book, the “ed” is often absent from words in the past tense, as in “Magnetin sheath his weapon.” The author’s loose grasp of tense can also lead to statements that are nonsensical, as in: “Morning broke but it was still raining from yesterday.”

Additionally, the author’s word choice is often perplexing. In the statement, “… the group awed at the most marvelous city they have ever set eyes on,” for example, it is unclear if the word “was” is missing before “awed” or if the author meant to say “aahed” or intended to use “awed” as a verb. At other points, characters “when” to a location instead of “went” there.

In Darkwind Chronicles: Act 1, Cifelli delivers a jumble of characters, action and description that lacks necessary technical structure. Without more control as a writer, the author is unable to corral his runaway imagination and create a satisfying reading experience.