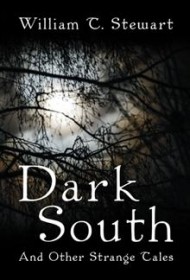 Dark South is a short story collection that promises “strange” and “mysterious tales” about people of the American South. Because author William T. Stewart’s first tale is about vampires traveling on a steamboat up the Mississippi in the aftermath of the Civil War, readers might expect offerings that evoke the terror-inducing prose of Theodore Sturgeon, or better yet, classic Edgar Allen Poe or H.P. Lovecraft. But while the book is chockfull of stories, not all are about ghosts and monsters. By the end, the fiction about human foibles predominates more than the supernatural.

Some stories include both human and otherworldly twists, such as one featuring an uncle who suddenly starts having premonitions of people who are about to die. There are ghostly stories, such as the mysterious woman whose black cats seem to presage violence and death on a group of corrupt small-town pols who want to tear down an animal shelter for a shopping development. There are also straight crime stories, such as the one about true-life blues great Robert Johnson’s fictional lost guitar and what the murder of a minor bluesman named Willie Tubo has to do with the instrument’s whereabouts.

The connecting thread between them all is the detail Stewart brings to his various settings; the author adds tidbits of history, whether the stories take place during the Civil War, the Depression or more recently. In addition, all the narratives are delivered in the first person.

Unfortunately, Stewart’s prose doesn’t glow with the brilliance of some of his inspirations. In one story, this line is about as descriptive as he gets: “I could see she was dressed in cheap clothes like the women I read about in dime novels.”

Still, Stewart’s writing evokes the spirit if not the letter of Ray Bradbury or Rod Sterling’s Twilight Zone television series, which aren’t bad storytellers to evoke. His stories make for an engaging read on the proverbial dark and stormy night.