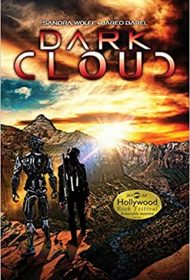 In Wolff’s landscape, the world has been transformed by a cataclysmic event, turning the Southwest deserts into lawless territories ruled by warlords. Here, society is feudal, with small-scale tyrants ruling with iron fists.

Protagonist Dark Cloud is merely trying to survive in this hellish landscape. Along with Ricardo, her surrogate father, and Klaatu, a protective “combat robot,” she seeks simply to live off the land and find some degree of stability in this post-apocalyptic world.

However, the local warlord General Stone makes that effort impossible. Along with his mercenaries, Stone has subjugated the local population, sending women to work in the local mines under brutal conditions and enlisting men in his mercenary army. Stone’s forces make Dark Cloud’s simple life untenable, especially when their general procures a dangerous new “toy”: a nuclear bomb.

As the story unfolds, Dark Cloud aims to derail Stone’s crazed, destructive plot with the help of allies and the gods of the land.

Wolff writes with the sensibility of a science fiction novelist, a gritty approach that’s deepened by Jared Barel’s effective artwork. Barel fuses photography and hand-drawn illustrations, a dynamic that invests the post-apocalyptic tale with immediacy.

That realism also comes through in Wolff’s talent for bringing characters and relationships to life. The ties between Dark Cloud and Ricardo – an engineer in the pre-apocalyptic world who built Klaatu and adopted Dark Cloud as his daughter – are especially moving.

At little more than 100 pages, the graphic novel doesn’t lend itself to a profoundly deep dive into character or plot, but the author does a surprisingly impactful amount with relatively little real estate. Science fiction and fantasy fans will find plenty of cinematic action and intrigue (the story began as a screenplay) in Dark Cloud, along with an impressive amount of literary depth and thoughtfulness.