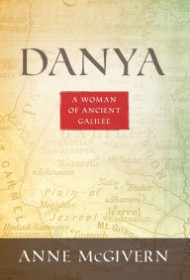 Anne McGivern’s excellent historical fiction debut, Danya: A Woman of Ancient Galilee, gives a rare glimpse into women’s lives in biblical times as well as the Jewish revolutionary movements that paved the way for the teachings of Jesus.

As the novel opens in Nazareth in 4 BCE, Danya is a bold 13-year-old who longs to accompany her older brother Lev on the anti-Roman raids led by historical rebel Judah ben Hezekiah. Like her heroine Esther, she believes she’s chosen to do the will of The Holy One, in this case by working toward Jewish freedom from Roman occupation.

After her father’s death, though, Danya’s place in society is uncertain. Her brother has joined the Essenes at Qumran, so she lives in Jerusalem with her half-brother, Chuza, who quickly puts her in her place, telling her, “You have no rights other than the ones I choose to grant you.” He quickly marries her off to Tobiah, a much older priest. Danya, though infatuated with Judah, gradually accepts her lot in life.

McGivern weaves in historical information smoothly, as when introducing the Jewish festivals of Passover and Sukkot. Details of room layout and food bring the scenery to life, and Danya’s confiding first-person voice overcomes any distance readers might feel from an ancient setting.

One of the novel’s highlights is Danya’s friendship with Miryam, mother of Yeshua (the historical Jesus). Those familiar with the New Testament will enjoy seeing how McGivern ties in incidents like the Annunciation and hints at Yeshua’s growing reputation as a religious leader.

Even as a mother of three facing illness and a child’s disability, Danya’s revolutionary spirit never fades. She is typical of her time—she cannot inherit property, for instance—yet exceptional in her ability to read scripture for herself and write her own resonant story.

Fans of historical fiction will find McGivern’s strong, compelling heroine hard to resist and will surely savor this compelling novel.

Highly recommended for fans of Anita Diamant’s The Red Tent and Geraldine Brooks’ The Secret Chord.