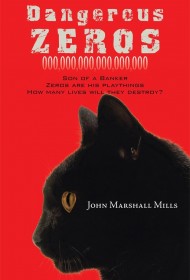 In John Marshall Mills’ cunning thriller Dangerous Zeros, the financial world has no place for the meek — or the ethical. But after falling from economic grace, his protagonist looks to change all that.

For Jamie Gulliver, spectacular financial success was all but guaranteed. The son of a prosperous banker, he seemed like the natural successor to the financial institution his father built — one that carried his name: Bank Gulliver. But when his father appoints one of his son’s dissolute peers to the board instead of Jamie, he resigns. After inadvertently meeting a working class family when a rich man rear-ends their only car, Jamie humanizes the plight of the poor, inspiring him to found BriteNewHomes — a company providing first-time buyers with affordable homes.

But when Lehman Brothers collapses, it leaves his company in peril and Jamie turns to a ruthless capitalist named Raymond Ballantyne-Smyth for help. Little does Jamie know that this decision will lead to a world of duplicitous international intrigue, extra-marital affairs, entanglement with the Mexican drug trade, murder, hospitalization, and monetary values adorned with multiple zeros for which people would kill. Through it all, the younger Gulliver holds his life together with the help of his puffer (to treat his asthma), the wisdom of a black cat named Cat, with whom he communicates, and a calming invention introduced to him by a doctor’s widow.

Dangerous Zeros is a shrewd financial thriller involving myriad characters and intertwining plots that pits its main character against the forces of an abysmally corrupt financial world that holds zeros in a higher regard than the people it fleeces. In gripping narrative, Mills shows that with earnest compassion, humanity isn’t necessarily at odds with a system so often wrought with greed and deception. It’s Mills’ first attempt at a novel, and he has proven his talent: this is a compelling work of prose.