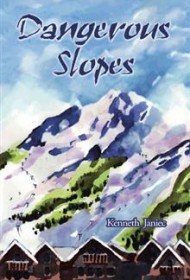 A former ski and snowboard instructor, Kenneth Janiec again aims his attention at the slopes for his first novel.

Janiec sets Dangerous Slopes in the fictional ski town of Elks Run, Colo. His protagonist is Mike Doyle, fresh from signing his divorce papers and determined to make a go of it teaching skiing and snowboarding while also running his own computer consulting company; in addition to hiring Doyle as an instructor, the resort owner contracts with him to maintain the ski area’s computers. When the resort’s newly installed gondola comes crashing down at the apparent hands of a saboteur, Doyle and his basset hound, Stanley, find themselves in the middle of a whodunit.

Janiec has the basics of fiction writing down: There’s a solid plot, a fairly plausible crisis and an ultimate resolution. As a technical support engineer with Oracle and the owner of two basset hounds, Janiec clearly writes about what he knows.

He stumbles, though, when he spends too much time focused on the minutiae of being a ski/snowboard instructor and too little on the mystery that’s at the core of this story. The details of what a part-time ski instructor is paid, for example, aren’t as pertinent in a mystery as, say, the motive behind the crime or the buildup of tension.

Some of the relationships between characters also could have been developed more fully. Mike ends up teaching snowboarding to the daughter of the ski resort’s president, and two lessons soon lead to a budding romance. But that side of the storyline lacks the necessary spark and it’s no surprise when the relationship — and the reader’s interest — burns out.

Janiec shows promise as a novelist, but he needs to work on his character and plot development if he wants to make it to the more advanced slopes of fiction writing. While Dangerous Slopes shows solid effort, the author too often tumbles along the way to his story’s conclusion.