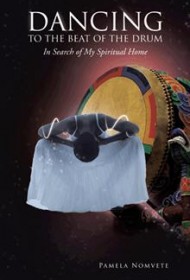 This autobiography is an honest and powerful account of actress Pamela Nomvete’s love life, betrayals and tragic times in the years when she should have been celebrating her success as one of the most recognized soap opera stars in South Africa.

Nomvete was born in Ethiopia to highly respected parents, including a father who worked as a top United Nations economist. She describes her childhood as “idyllic,” predominantly spent at boarding school in England. She pursued acting and built a successful 10-year British stage career. Her life’s turning point came when she returned to South Africa to vote. Though she meant to stay just two years, she remained much longer after landing a plum role in Generations playing “the bitch, Ntsiki.”

Her sudden fame became her downfall as the actress fell into an unhealthy relationship with a conniving man seven years younger who brought unsavory family members into her household, took control of her spending and even had affairs on the side after they married. Drawn into a web of powerlessness, Nomvete eventually lost touch with reality, became homeless, and desperately reached out for spiritual help from everyone from shamans to Christian church leaders.

As her life spiraled downward, she lost everything and was forced to live in her Mercedes, which she desperately begged strangers to buy just to get money for food. At long last, she regained her self-worth and footing through the kindness and human spirit of ordinary South African people and by learning to “dance to the beat of the drum.”

This confessional book is simply written, yet gripping from the start. Nomvete pulls no punches in admitting to all the foolish mistakes she made in letting others manipulate her life. She learns the hard way that fame has “relentless, merciless, slashing claws,” and she is open and straight-forward in sharing how her own life became a soap opera of the cruelest kind.

Wise and introspective, Nomvete’s book about her search for identity is worthy of a wide audience.