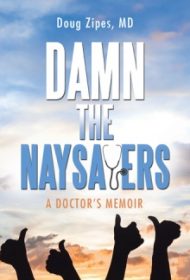 Writing about his adventurous rise to the top of his field, cardiologist Doug Zipes offers keenly observed, often humorous, sometimes nail-biting recollections. Whether developing lifesaving techniques or being tailed by the KGB, he jumps seamlessly between his 1940s’ Downstate New York childhood and the present.

Zipes doles out recollections by their entertainment value, rather than chronologically. He begins at a cardiologists’ gathering in Moscow in 1982. A refusenik (a Jew refused a visa to leave the USSR) had asked him to address a clandestine group of scientists, updating them on world research. Aware of the risks, including arrest by the KGB, Zipes not only appeared but even smuggled out their messages to loved ones in America. Zipes’ cloak-and-dagger account— “zigzagging through Red Square, from trash can to trash can” to destroy their original handwritten notes — rivals a Bond film.

The author follows with stories of his working-class upbringing, including a charming anecdote of nine-year-old Zipes defending home and hearth with his BB gun. After the first shot failed to rattle his target, Zipes writes, “I stood alone in the pitch-black room holding my Daisy Red Ryder pump-action BB gun, facing the onslaught of one demonic, red-eyed, pissed-off rat.” The rodent escaped through a hole in the eaves, which Zipes and his father repaired after dinner.

Although most chapters feature a “Who’s Who” of cardiologists whose names aren’t widely known, general readers will embrace these insider details as they are bolstered by page-turning anecdotes. For example, at a symposium Zipes co-chaired for a medical device company, he remembers finishing dinner when “a flying potato hit me in the forehead. Yes, a food fight — among distinguished but inebriated cardiologists — that I did not start but could not let go unchallenged.”

Three final chapters offer details about Zipes’ participation in professional societies, his family and personal health, and his secondary career as a fiction writer. While less compelling, they do little to dampen enjoyment of this highly engaging book.