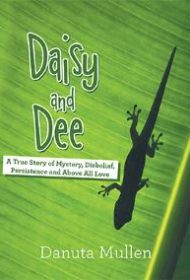 A woman discovers an out-of-place gecko lizard and adopts it, in the nonfiction children’s book Daisy and Dee: A True Story of Mystery, Disbelief, Persistence and Above All Love.

Daisy and Dee takes place in Ontario, Canada, an unlikely location for a stray leopard gecko, a species not native to the area. Understandably, the book’s author and narrator (along with family and neighbors) doubts the scattered sightings of a lizard that looks like a yellow “baby crocodile” inside her garage. However, when her suspicions are confirmed, she springs into action to save the presumably abandoned pet before the weather turns too cold for its survival. The gecko, given the name Daisy, quickly becomes part of Dee’s family.

Daisy and Dee is a text-heavy book; its only art is a 13-page photo gallery at book’s end. It perhaps would have been wiser to insert these images throughout the book, as the unrelenting text blocks will likely intimidate young readers.

Mullen’s writing is descriptive and often engaging, although slips of tense and other minor errors occasionally appear. The bigger issue is whether children will have the patience to let the story unfold. Mullen does a solid job building suspense, but her dense storytelling style is heavy on detail and prone to sentences more attuned to adult sensibilities than a child’s, as in: “Illusions, fantasies, and misperceptions can, after all, become reality if you stay true to your own intuition.”

The book’s amateur photographs are of people referenced in the story and a few somewhat distant, images of Daisy herself. One good close-up would have been more effective than the many snapshots. Given Daisy’s presumed availability for photographs in the author’s home, the lack of a close-up seems an oversight.

Despite these issues, Daisy and Dee tells a sweet story. It might appeal to older elementary school-aged children who aren’t put off by the dense text and those interested in animals.