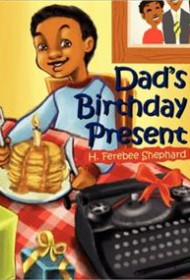 Dad’s Birthday Present, written by H. Ferebee Shephard, is a picture book celebrating creativity, curiosity and family. When young Justin forgets to buy his father a birthday present, he learns about the power of authenticity and love.

On the morning of Justin’s birthday, he wakes up excited for the day to come. He heads downstairs to greet his family—which consists of Mom, Dad and his older brother—dressed in his best birthday outfit. A special breakfast of waffles and sausage awaits him, as does the extra-special gift he has been waiting for: his father’s old typewriter.

Justin can’t wait to start playing Jr. Reporter; that very day he begins an article about his older brother and soccer. The following week, he writes a story about his mother. Next, he writes about his much-treasured father— but he’s so involved in his writing, he forgets to buy a present for his Dad. To his surprise and delight, his father likes the story Justin has written better than anything store-bought.

In assessing the picture book’s appeal to children, one worries that Justin is the rare little boy who wants an old Smith-Corona instead of a Gameboy. Ultimately, even with its simple charm, this is a book that may resonate more deeply with parents than today’s digitally savvy kids. The text also has a few punctuation issues (such as the missing comma in, “Justin’s brother said [sic] ‘This is great!’”

Nonetheless, Dad’s Birthday Present offers warm illustrations and good humor. Better yet, it reminds readers that a loving family is life’s greatest gift — and that the presents that last a lifetime are often one-of-a-kind and handmade.