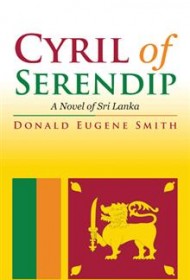 In his novel Cryril of Serendip, Donald Eugene Smith, professor emeritus of political science, weaves a novel of family, friends, and love within the complex and dense atmosphere of religious and political and ethnic tension in Sri Lanka in the years after its 1948 Independence from British colonial rule.

Oxford-educated Cyril and his circle of professional friends, a mix of “Sinhalese, Tamils, Buddhists, Hindus, Anglicans, and Catholics . . . are comfortably united by affluence and the English language.” Coming to the fore in the country, however, is conflict over what the official language(s) will be now that the British have gone: Sinhala? Tamil? Or both? Professionally successful but his personal identity adrift, Cyril, a Sinhalese, says it’s, “easier to state what we’re not–western or British or Indian–than to define what we are, other than inhabitants of this island.”

The most intimate discord in the novel–Cyril’s estrangement from, and then the death of, his authoritarian father–takes Cyril to the Buddhist religion of his childhood as he searches further for identity and meaning. In the process of this journey, Cyril is drawn into an adulterous yet beautiful and dramatic love story with Sita, a Hindu Tamil and wife of his law-firm partner. The novel’s many conflicts share a common theme: the breaking down of barriers and the coming to the doctrine of “no soul,” no self, no ego.

Through the story of Cyril, Smith gives Sri Lanka’s civil unrest a human and personal aspect. The third-person limited narrator clearly and unpretentiously lays out the motivations and consequences of competing ideologies in a country struggling for new identity. Though plot movement slows at times, the details and factual history of opposing factions solidly support the story and give added authenticity to the development and actions of characters. Elegantly and skillfully showing history in the making rather than in the telling, Smith has penned a fine historical novel.