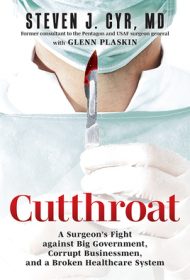 Written as a warning to others, Dr. Steven J. Cyr’s book discusses the pitfalls of being a physician entrepreneur and the severe legal challenges to himself, his family, and his surgical spine practice that he eventually surmounted.

Despite this solid background, the doctor found himself ensnared in a kickback racketeering investigation that nearly led to financial ruin. What were later found to be unsubstantiated claims culminated in his being targeted for federal indictment for illegal medical business practices under the Stark law that prohibits physician referrals to businesses a doctor has a financial relationship with. Despite the author’s adherence to relevant laws, his business partner—who was eventually indicted and prosecuted— had sucked him into a hidden web of unscrupulous business practices and conflicts of interest. While he avoided criminal prosecution, it took years for Cyr to retrieve his reputation and finances.

The author learned the hard way that physicians in private and group practice must attend to medicine’s business side to avoid falling into similar legal and financial traps. Sprinkled throughout discussion of his challenges, Cyr addresses issues that can make or break a practice, including leasing, staffing contracts, due diligence for purchasing major imaging equipment, and finding the right accountant and lawyers.

Family and friends will be interested in Cyr’s biography, including tributes to his wife LeAnn and details of his family life. However, this cautionary tale is primarily aimed at physicians and other medical provider entrepreneurs.

It takes perseverance to get through the complex regulatory, financial and legal issues Cyr became embroiled in. But the narrative provides helpful insights for health care providers making crucial business decisions that can potentially lead to legal jeopardy.