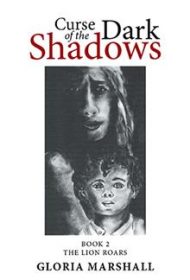 A dark, haunting work of historical fiction, Curse of the Dark Shadows: The Lion Roars is a story of adventure, family and a broken man’s quest for redemption.

Lord Geoffrey Brightwood has returned to England after years in India. With him, he brings two young sons, each from a different mother. Although he seeks to give them the lives of privileged, titled English boys, their exotic backgrounds follow them. They never quite fit into English society.

Their father’s past is haunted, as well. He bears the scars of childhood sexual abuse, which shapes his relationships and capacity for love. He seeks sexual companionship from both men and women (and these passages can be explicit) but struggles to find fulfillment. Brightwood attempts to build a stable life in England, but when a visitor from his past needs his help, he and his family embark on a perilous overseas journey; not everyone will return.

The story is divided into two parts, one in which Brightwood struggles to establish an estate and comfortable home in England and another in which the family journeys to Africa and then the Middle East and faces mortal danger. The two parts read almost as separate books. Part one is a bit sluggish, focusing on slow-moving British period life and Brightwood’s efforts to establish a stable home life. Part two, on the other hand, is fast-paced, action-packed and exciting.

Despite their differing natures, both parts succeed in telling the story of a damaged, flawed man who wants nothing more than to protect his family. Brightwood possesses the detached nature of a wealthy lord of this time period, but his soul seeks love. Eventually, readers are rewarded with a satisfying, yet appropriately bleak, conclusion to his tragic story.

Despite the uneven treatment, this mysterious, gloomy novel will speak to readers who enjoy adventurous, historical romance with a darkly sexual edge.