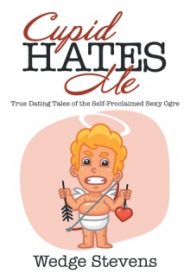 The subtitle of Wedge Stevens’ book says it succinctly: This is a collection of dating tales by a man who sees himself as a likable lunk, something like a human version of the animated character Shrek.

Cupid Hates Me is a chronological rundown of Stevens’ hapless love life, starting with his earliest childhood crushes through his chaotic adulthood. The author has held a string of low-paying jobs, been homeless and attempted suicide several times, so it might surprise some to learn that he’s had more than his share of relationships.

In chapter after chapter, Stevens delivers his tales of dating mismatches and mishaps, writing in a breezy conversational style. He tells of accidentally pulling off his lover’s hair during sex (it turns out to be a weave); of the woman he meets online who answers her door wearing only a fishnet body-stocking; of a co-worker he falls for who turns out to have a live-in girlfriend.

His relationships sometimes last one date, sometimes longer, but always end up in a split. Most stories close with a list of things he learned from that particular woman and the final conclusion: “I still had a lot to learn about women.”

Stevens professes respect for his dates but can come across as an old-school chauvinist. He judges women by the size of their “racks” (“Hey, I am a guy, after all”) and often describes his dates by their looks—“breathtaking,” “downright beautiful,” “not the most beautiful woman on campus”—in spite of his own not-so-hunky looks. He can seem cavalier, at times, about getting women pregnant (which happens more than once).

Still, his stories are largely entertaining. They may not appeal to those who haven’t dated dozens of the opposite sex, and they come at an awkward time, given the country’s sudden heightened awareness of men’s sexual advances toward women. But committed serial daters should identify with Stevens and the wisdom he imparts from his many experiences.