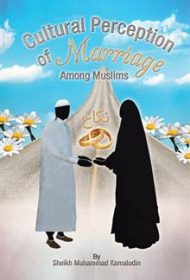 In Cultural Perception of Marriage Among Muslims, Sheikh Muhammad Kamaludin seeks to delineate the practices surrounding Muslim marriage that adhere to the teachings of the Islamic prophet, Mohammed.

Kamaludin’s book is based upon 30 years of experience derived from “working in muslim [sic] communities,” when he found that many Muslims had mistakenly integrated “their cultural and traditional customs into the Islamic code of practice.” The book is partially written to correct what the author perceives as these regrettable innovations, and partially to provide marriage counseling (the book’s latter part includes case studies and advice).

Kamaludin stresses that marriage is not just the union of a husband and a wife, but also the blending of two extended families.  The woman’s male guardian (usually her father) plays a primary role in selecting her husband and making sure that the merging families are a good fit. Kamaludin also discusses, among other topics, the criteria for selecting a spouse, the duties of a wife and of a husband, and acceptable reasons and procedures for divorce.

Much of what Kamaludin covers may seem foreign or a throwback to another era to western readers, as when he lists a woman’s tendency to leave the house without her husband’s permission as one of the reasons for friction in a marriage. A reader’s acceptance of the material will likely be based on their religious beliefs before opening the book.

Regardless, the text suffers from several technical issues. The Islamic words scattered throughout the narrative will likely prove difficult for some readers. A few, like shariah, are defined in the glossary, but too many others leave readers groping for meaning.

The book also suffers from an abundance of grammatical errors. Verb tense, capitalization, and subject/verb agreement problems abound, as do typos and bemusing malapropisms (“human beans,” for “human beings,” for instance).

Kamaludin’s book will be informative for those open to his ideas. But it requires considerable editing to be approachable for most readers.