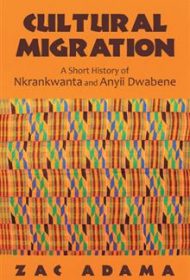 A native of the “crossroads” Ghanaian city of Nkrankwanta, author Zac Adama gives an engaging lesson in the language, history, geography and culture of the Anyii Dwabene, an Akan tribe who live primarily in Ghana and Ivory Coast.

This is a foreign topic for most American readers, and the many unfamiliar words (some written with non-standard alphabetical characters and many provided in both local dialects, Anyii and Twi) are challenging. But the reading gets easier after the initial chapters, which describe the migration that resulted from colonial oppression and Nkrankwanta’s founding in 1917 – “a story of fact, legend and magic.”

Adama devotes sections to traditions such as marriage and betrothal rites, African spirituality and its pantheon of gods and spirits (with nods to Christian and Islamic influences), and funeral traditions such as the dirge, an art form where a woman skillfully extols the dead person’s life through weeping and storytelling.

The account is a comfortable mix of the scholarly and personal, in flawless English. For example, a table summarizes the history of tribal leaders, and endnotes cite research. But the author also relates traditional stories his late uncle told to entertain and teach morals, such as the humorous “ghost” tale of the young man who snuck out to visit his lover in her bed late at night, not knowing she had died during the day.

Adama, an IT professional now living in Calgary, wrote the book to put in writing the oral traditions he learned as a child, as well as to educate readers and promote peace. He doesn’t try to do too much, such as turning this into a memoir or describing the considerable harm of British and French imperialism in the region.

The audience for this proud and upbeat story is limited, but it is a rich and readable addition to the written history of this Akan ethnic group.