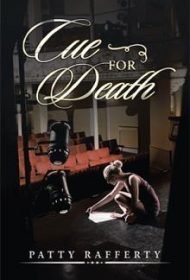 The theater provides the backdrop for Patty Rafferty’s mystery novel, which presents readers with intrigue from the beginning.

In the first scene, the as-yet-unnamed female narrator is introduced struggling to escape an attacker. The only features she can discern are a large shape and menacing voice in the dark backstage area of what is later identified as a community theater briefly lit by lightning flashes. She is aware of her mother’s lifeless body on the floor. Through a series of near-misses, and despite being severely injured, the girl eludes her assailant.

It is soon revealed that the narrator is 14-year-old Penny Nolan. Penny sustained several broken bones and is psychologically scarred by the ordeal. Because the theater burned to the ground the night of the attack, her mother’s death is ruled accidental, as there was no evidence of anyone else in the building.

Time moves quickly in Rafferty’s hands: first Penny is hospitalized, then living with her aunt, meeting her soon-to-be best friend, attending high school, college and eventually joining a theatre troupe after graduation. Throughout, Penny questions the events of the night of the fire. She has no clear recollection of what occurred, yet is haunted by the intermittent presence of a threat: something no one else sees or believes. Nonetheless, Penny follows in her mother’s footsteps, pursuing a passion for the theater.

Rafferty’s writing is terse, and the transitions from one phase of Penny’s life to the next are abrupt. For example, the story jumps from her early days in college to graduation in less than 30 pages. Although Penny grows from a young teen to an intelligent, talented woman during the course of the story, her voice and attitude remain unchanged throughout; her personal progression needs more detail and nuance.

Despite these misfires, the story is intriguing overall. The element of suspense is strong, and readers will appreciate finding out the answers Penny seeks as the story unwinds.