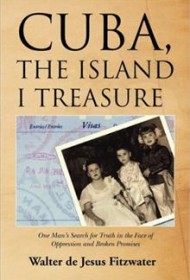 The author’s account of his three-week return to Cuba is in part sentimental journey, part tourist diary. The book’s odd charm lies in the wide-eyed buoyancy of the traveler himself.

Fifty-eight years old at the time, Walter de Jesus Fitzwater narrowly escaped being robbed and beaten at a Havana dance club but remained smitten by the “hot Cuban woman” who put the hook in him: “I would have worshiped her forever.” He was startled by the poverty he witnessed but hopeful that Cubans will one day have “what every other human being wants, besides the basic food, shelter and health. They want Rolex watches, fancy new cars and money to take their dates out.” Listening, Fidel?

Born in Virginia but raised in Cuba, Fitzwater’s family emigrated to Jacksonville, Florida in 1962, after the Cuban Missile Crisis. He spent 14 years in San Francisco, indulging his tastes for street theater, hallucinogens and what he calls “indiscriminate behavior” in the city’s gay subculture and was diagnosed HIV-positive in 1988. He then took a job in Florida’s state bureaucracy and joined an amateur theater company.

The Cuba trip with fellow actors was a chance to recall his childhood, conduct theater workshops with other HIV patients, reunite with some dimly-remembered cousins and, on his last night in Havana, overpay a street dealer for a couple of Cuban cigars, an incident he recalls with self-mocking humor.

Readers interested in Cuba and students of international politics will find many fascinations in this intimate first-person account, which seeks to reconcile past and present in the life of a volatile nation–and in the life of the author. The writing can be vivid: “The country’s incongruities were not part of me tonight; I was happy to have come. It was my land, my home, and my people.” It can also be murky: “Time had begun to pacify my anxiety, and pain was becoming accepted and slow.” Always, Fitzwater’s search for the truth about himself and his homeland is heartfelt.