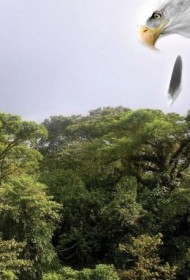 Cuauhtemoc: Descending Eagle begins a fantasy series set in South America in the 16th century just as Europeans are beginning their plunder of the Mayan Empire. Unlike more common alternate histories from authors such as Harry Turtledove in which the writer changes a major event in the past, adding, for example, a civil war or world war battle, D L Davies imagines the effects one messianic individual might have had on a society.

This first book (the second, Cuauhtemoc: Descent of the Sun Priests, has also been published) begins as Cuauhtemoc, the chosen one, is marked over his heart on the day of his birth by a falling golden eagle feather. It then takes readers through Cuahtemoc’s first 12 years.

Cuauhtemoc boasts a flawless memory, exceptional physical skills and a quick mind. Thus, the boy is an ideal candidate to become a “birdman,” one of the airborne couriers who flies over the jungle in hang gliders the author envisions, delivering messages from village to village and orders from the Mayan capital. In addition, this 12-year-old teaches his elders valuable practical and ethical lessons and becomes the leader of his contemporaries. Each of Cuauhtemoc’s adventures presents a moral that emphasizes loyalty, respect, or another quality important to young readers.

Davies excels in three areas: his vivid descriptions of jungle and village life; his characterizations, especially of secondary characters such as Cuauhtemoc’s friends and mentors; and his natural-sounding dialogue, perhaps the most difficult task for an aspiring author.

Older readers may find some of the author’s explanations of simple words and activities tedious and unnecessary. (For example, he mentions that a tapir is a “pig-like” animal.) In addition, occasional grammatical problems detract from an otherwise impressive first novel.