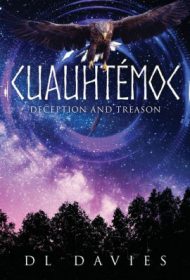 When the first three books in D L Davies’ alternate history of the 16thcentury were released in rapid succession, the author promised a fourth. After a long hiatus, Cuauhtémoc: Deception and Treason completes the episodic tetrology.

Previous titles followed Cuauhtémoc from a boy, through his rise to Mayan emperor and his awakening understanding of his talents, some supernatural, including the ability to converse with animals and speak all languages; a knowledge of modern and ancient war strategies; and his unique charisma.

Deception and Treason begins in Cuauhtémoc’s 18thyear. In addition to his other paranormal abilities, the boy emperor has learned to teleport himself, other people and items instantaneously anywhere on Earth. He also knows people’s intentions by reading their auras and converses with both Christian and pagan gods.

As the novel unfolds, Cuauhtémoc thwarts the European plot to spread smallpox in the New World, nearly wipes out piracy on the seas, invents the steam engine and perfects human flight, as he and his brothers sprout wings others cannot see. Meanwhile, the Mayan empire rises to global supremacy, and Cuauhtémoc even handpicks the kings of England and Spain. While all this might seem impossible to believe, Davies’ protagonist has matured gradually through the series, so his outsized prowess has become expected.

By series end, readers have met myriad characters, some actual historical figures, including Cuauhtémoc, who really was the last Aztec emperor. Male characters are well developed, but some may be offended by the utopia Davies presents, where women are happily subservient and polygamy, bestiality, incest and other taboos are accepted.

Davies’ talents as a storyteller and wordsmith have matured throughout the series: Gone are previous grammatical and structural problems, and despite this story’s episodic nature, readers will be eager to see what happens in each adventure.

Fans of alternate histories—especially those where the underdog in real life changes the world and ultimately wins—will enjoy this title and the series as a whole.