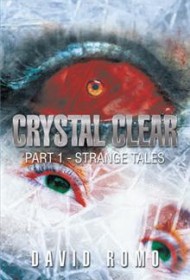 Pedro is the sort of boy who makes a mess of everything he attempts. He is often the butt of practical jokes, and even his occasional stabs at doing something exceptional, such as a school science project, explode (literally). His luck changes, however, when at 21, he receives a $500 bill attached to a mysterious letter directing him to a casino; there, Pedro the loser becomes a big winner, gets mugged by casino goons, and winds up in the care of Chris, a 1,700-year-old woman.

Slowly she helps Pedro figure out why his life has never been normal, sorting out his confusing childhood memories of the weird “relatives” (actually, aliens) who brought him unusual presents: a gold necklace with an inset crystal, and box of blue rocks. Pedro learns that his father, missing for five years, set off an uncanny chain of events by inadvertently discovering the underground hiding place of Yeti-like aliens whose powers exceed earthly imagination and whose intentions are as yet unknown.

Romo has created a clever, fast-moving story. Snappy dialogue is his strong suit, and in Pedro he offers a likeable character, capable of maturing into new situations. Towards the end, though, Romo’s narrative frays, with new characters suddenly added, older ones lost in the shuffle, and subplots proliferating. Readers are likely to get a bit lost in the shuffle.

This is Part One, so we assume the broken links will eventually be rejoined (although many readers prefer a novel that stands on its own). Avid sci-fi/fantasy fans may find that these bumps and wobbles simply increase the intrigue and will look forward to the sequel.