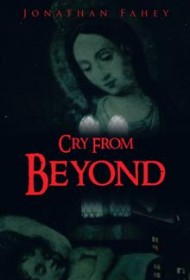 Cry from Beyond tells the story of the Fahey family of Galway, Ireland, which was terrorized by paranormal activity from October 1996 to May 1997. The author writes that the Fahey home was located on the same spot where a baby (or fetus) was murdered (or aborted) in the early 1900s. He believes that the baby’s spirit haunted the family, its appearance triggered by the birth of baby Sarah-Louise.

It’s the foundation for a good tale, but the author fails to deliver for many reasons. For starters, the book is replete with basic writing mistakes: Single and double quote marks are interchanged; sentences end with commas; sentence fragments abound; and there are question marks where periods belong. No page in the slim book is without at least one mistake; some have as many as a dozen, making for difficult reading.

The writing is also unfocused. The author drifts from what could have been a suspenseful story into Church teaching, tells unrelated ghost stories, and often leaves readers hanging or confounded with sentences such as: “He told us not to let Sandra anywhere near our house, at her type well end bring worse things In [sic] to our lifes and home.”

Even the author himself is confusing. There’s no biographical information, and we are left wondering what his relationship is to the Faheys. More confusing, baby Sarah’s grandmother quotes the child talking about the spirit: “Sarah also said that he’s [sic] name was called Jonathan.” Is the author the ghost? Readers have no clue.

There are other problems: The text refers to photos that aren’t in the book, the spirit baby’s parents may have been a clergyman and a nun, but Fahey never offers solid evidence; and he tells readers that the true account of the haunting could not be told until now but doesn’t say why.

Suffice it to say that this book requires major revision before it can satisfy readers.