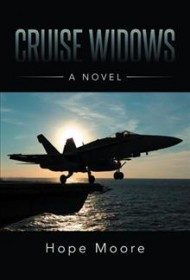 Military wives and dependents often are the unsung heroes when spouses are called to serve far from home. Hope Moore’s novel, likely drawn from personal experience as a former Navy wife, follows five women left behind.

The introduction relates brief backstories of the main characters and their spouses. It also provides the figurative definition of the title as a term “exclusive to the US Navy and applies to all the women whose husbands are aboard a navy vessel at sea for the period of at least four weeks…. “ A literal definition surfaces in the first chapter when two of the men are killed at sea. Because the reader knows from the onset who dies, the story has no element of tension.

In what seems to be a flashback, Moore then focuses on the camaraderie the women develop as their husbands prepare to leave and then while the men are away for nine months. Each week one woman hosts a tea or gathering. Details are provided about what is served, the china used or the observation that some take their coffee black. What’s absent is the exchange of meaningful feelings and insights that help forge true friendships.

Numerous missing words and typos are distractions, but more troubling is the wooden dialogue. It’s difficult to imagine a mother saying, “By then I’ll know about the children’s disposal” when discussing childcare as she prepares for a trip.

Also bothersome are several plot inconsistencies. For example, an incident occurs at the memorial service for the deceased men. Their widows exchange harsh words and a slap. Yet, all five women gather soon after for a final luncheon as if all was well.

Unfortunately, the novel isn’t about enduring relationships. Consequently, it lacks the depth that would attract an eager readership.