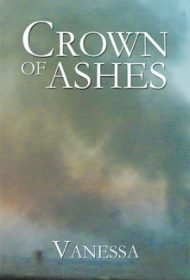 Crown of Ashes is a dramatic memoir of an American woman who lived in Syria for nearly four decades. The author uses her first name only, presumably to protect her and others’ identities.

Soon after graduating in the 1970s, Vanessa flew to Syria to marry the man she fell in love with in college. Only after their wedding —which took place on her first night in Homs, Syria—did she discover that her new husband’s family was highly dysfunctional and that he was unbalanced and easily prone to violence.

In this precarious life, oscillating between cruelty and placating kindness, Vanessa had three children. This kept her from leaving, as that would have meant up giving up her children. Despite this, she not only endured, but raised three reasonably well-adjusted sons, founded and ran a successful language institute, and grew to love the country and its culture. With the eruption of Syria’s civil war, Vanessa faced a final twist of fate: She ultimately had to leave, along with her grown sons and grandson.

Crown of Ashes, is a nonstop rollercoaster ride, yet one of the memoir’s key strengths is that Vanessa never indicts her adopted culture, despite her harrowing hardships at the hands of her abusive husband. When she leaves Syria, she is bereft.

It is, thus, unfortunate that the narrative reads more like journal entries than an artfully crafted memoir. The author details events chronologically, sometimes including irrelevant conversations and happenings. The story often seems like a soap opera drama, rather than what it is at heart: the tale of a life lived bravely, in which important lessons were learned.

Overall, the book feels written more for Vanessa’s own healing and catharsis than for a general audience. Even so, readers will find vital messages about giving voice to one’s rights, loves, and truth, and thriving under duress. The author also presents Syria from the valuable perspective of someone who understood and loved deeply this land and people.