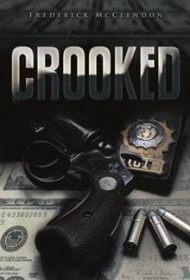 A private investigator faces his inner demons while chasing down street-smart thugs in this fast-paced but unevenly developed thriller.

In Crooked, Brooklyn P.I. Kelly must find out who framed a young man for the murder of a powerful mob boss. But is the accused, James Turner, truly innocent? And why did this complex case have to come along on Kelly’s first day without cigarettes?

McClendon’s writing has a certain immediacy that pulls readers in through Kelly’s determination and intelligence. Even as Kelly struggles with his mental and physical withdrawal from smoking, he still manages to put together a coherent picture of a complicated case that includes family secrets, corrupt police officers, and large sums of money. But, while the author offers all the elements of an engaging thriller, he fails to fully develop many aspects. Kelly’s character may be convincingly multifaceted, but others are sketched more shallowly. We know Kelly’s girlfriend Julie is a lawyer, but we learn little else about her. The corrupt police officers themselves are fairly generic, often known only as “the black cop” or “the other one.”

Similarly, while many of the stakeout scenes are vivid and tension-filled—Kelly with a gun to his head while the gangsters drive away with Julie, for instance—the connections between scenes are often difficult to follow or simply not provided. Readers may be momentarily confused by things like a car chase that is followed suddenly by a conversation in Kelly’s apartment. The novel’s overall flow would be improved by closer attention to transitions between settings.

McClendon is an ambitious author, with a lengthy list of projects in the works. This novel is a promising but unpolished entry into the thriller genre.