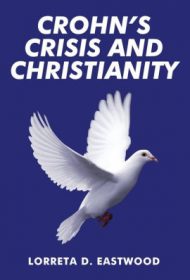 In Crohn’s Crisis and Christianity, Loretta Eastwood inspires readers to live life to its fullest despite chronic health challenges.

At age 21, Eastwood was diagnosed with ulcerative colitis or Crohn’s disease: “An incurable chronic inflammatory disease of the digestive tract.” Her adult life has been a continuous struggle with flare-ups of her condition, which include bouts of fever, diarrhea, loss of appetite, fatigue and more.

Despite numerous surgeries and difficulties, Eastwood married, had a baby, adopted a daughter, worked 40 years as a registered nurse, trained to be a security guard, retired, worked as a nanny and currently ministers to people online through prayer and counseling.

In this brief memoir, Eastwood encourages readers, especially those suffering with Crohn’s disease or other chronic disorders, to conquer their challenges by trusting in God. She states: “My pain drew me closer to God…use prayer or a doctor or a psychiatrist, use them all.” She urges readers to not “let the disease define you.”

Eastwood writes authoritatively about many of her surgeries, as well as the methods and medications she has used over the years to treat her illness. At times, though, she wanders too far from her topic. For example, she uses five of the book’s mere 47 pages devoted to text to share a cover letter and resume, with no explanation for its inclusion. Similarly, the “Code of Ethics for Security Guards,” some of her letters to God, a “Prayer for our Nation,” and her “Top Ten Predictions for 2017 and Beyond” add to the disjointed feel of the book. While they are interesting, Eastwood fails to tie these stand-alone elements to the topic of living a vibrant, successful life with Crohn’s disease.

Better editing would have helped Eastwood deliver a more focused message. Still, her memoir is an inspiring, positive example of how one woman used her faith in God to live joyfully amid the setbacks and challenges of chronic illness.