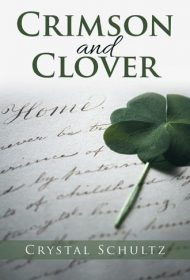 In the tradition of Stephenie Meyer’s bestselling novel Twilight, Crimson and Clover is a young adult novel featuring a love story between a vampire and a human against a backdrop of serial murders and warring vampire groups.

Cordelia Slade has returned to West Virginia and the town where she was turned into a vampire some 60 years earlier. Cor is “tame,” part of a vampire family that doesn’t attack humans, but a “rogue” group that does has threatened them, and so the family has dispersed. Cor is lying low and attending high school, where she meets and quickly falls for Paul, an artistic and sensitive teen.

Author Crystal Schultz builds a convincing picture of small-town American life in 2010, including Thanksgiving cooking mishaps, attending church, and the minutiae of high school life. Characters are likable and well-rounded. Paul and his competitive brother Chad are attracted to Cor, but both struggle to deal with their mother’s death some years earlier.

When Cor is joined in her new home by Errol, a fellow tame vampire, they train for the coming battle with the rogues, a prospect that seems increasingly likely as a local teen is found dead.

Although the story has promise, Crimson and Clover suffers from several flaws. It’s overlong and poorly paced with too much repetition of mundane, everyday activities. Much of the backstory between the vampire groups remains unexplained, and a connection between Cor and the death of Paul’s mother is never fleshed out. Multiple similar scenes of vampire training finally lead up to a brief battle that is ultimately inconclusive, and the novel ends on an unsatisfactory cliff-hanger.

Although individual scenes are well-constructed, errors in grammar and tense distract throughout, and the dialogue between the teenage characters is often stilted and unrealistic.

Ultimately, readers may find themselves disappointed by this offering, which lacks the drama and pace that attracted so many Twilight readers.