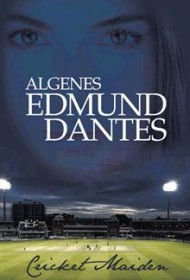 A magical bat, an eight–foot-tall assassin, a being from the heavenly realm, star-crossed lovers, and a mystery all come together in this contemporary, genre-melding novel by Algenes Edmund Dantes featuring the game of cricket at its core.

The energetic story, set in England and India, features quite a large cast of characters, chief among them Landon Beau, a 28 year-old widower who resigned from the police force after his wife’s death. Landon, a cricket player and particularly gifted investigator, is recruited by the local police to help with an investigation involving match fixers and the attempted murder of an honest cricket coach whose family’s connection to the game goes back 200 years.

This history includes the use of a bat somehow infused with supernatural qualities that assure victory to the team that has possession of it, but it is only to be used in dire emergencies. With a critical match between amateurs and bribed professionals soon to be played in London, extraordinary measures are called for, and the bat, known as The Enchanted Willow, is required in order to thwart the evil that could overtake the game. The search is on from England to a treacherous forest in India to find the bat that was last seen in 1810.

The book is intricately plotted, witty, and madcap in the manner of the Pink Panther, The author skillfully and playfully defines the novel’s many characters, which include a robot/secretary dressed as a woman and a ruthless siren named Cindy Fartington.

Readers unfamiliar with the game, who don’t know their wickets from their bowlers, may feel bogged down by confusing play-by-plays of matches. As a result, the novel is unlikely to attract many American readers. For those who love cricket, however, it’s a glorious, satisfying fantasy, well written and great fun.