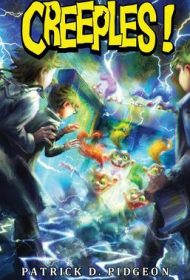 The three are flabbergasted when their concoction spawns six, 20-inch-tall, endearing humanoids who they dub “Creeples.” With their colorful tufts of hair and potbellies, they resemble troll dolls, and although each have a distinguishing characteristic, they share a knack for creating bedlam.

Then one day, after eating Spig’s cat’s catnip, they morph into aggressive creatures, able to blast light rays onto inanimate objects, bringing them to life. The trio struggles to lasso them as they run around campus animating things, including vending machines, gargoyles, and the statue of the school’s mascot—a pterodactyl.

But others are also trying to capture the Creeples for their own, sinister purposes, and it’s up to the students to stop them—while the clock is ticking.

Pidgeon’s story delivers a galloping narrative, marvelous characters, spot-on kid dialogue, a compelling mystery, charm, and heaps of laugh-out-loud humor. Imaginative descriptions abound, as in: “He…sported a pair of front teeth with a gap that could hold a credit card.” Readers will love the nail-biting moments as the three students must alternatingly spy, hide, disguise themselves, and comically outwit authority figures.

The Creeples themselves are simply irresistible, whether they’re taking a ride on a roaming Roomba or giving a nasty student an atomic wedgie. And best of all: the epilogue reveals a sequel.