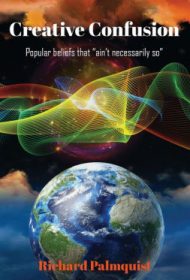 Richard Palmquist’s Creative Confusion argues against accepting the expertise of scientists regarding cosmological questions. In doing so, Palmquist aims to carve out a defense for a literal biblical perspective. Topics discussed include the big bang, evolution, and the Earth’s rotation.

The author notes that because many believe they wouldn’t understand scientific explanations, they often surrender their rightful authority to so-called experts. Instead, he encourages readers to scrutinize scientific logic, suggesting that scientific conclusions are often unjustified. To that end, he frequently quotes a Porgy and Bess line originally intended to question biblical authority, repurposed to critique scientific findings: “It ain’t necessarily so!”

Palmquist implies that scientists present theories as facts. But theories are devised to explain facts, not the other way around. Theories that endure repeated scrutiny may attain the status of law, but may still turn out to be wrong, as the author notes in his discussion of Newton. However, the lack of absolute certainty inherent in scientific findings doesn’t require that we reject them, only that we apportion our beliefs to evidence. And it certainly doesn’t grant equal authority to alternative beliefs that lack evidence.

Palmquist’s alternative to scientific findings is literal biblical truth, which he credits without scrutiny, as if self-evident. For example, he asserts that the Earth doesn’t rotate, partly based on scientific misunderstanding about atmosphere and partly because a rotating Earth would contradict scripture. The fact that rotation is observed and confirmed from space is one of many details that must be explained away to justify belief in a fixed Earth, and one of many cases where Palmquist begins with the assumption of the literal truth of the Bible and works backwards from there.

Creative Confusion is replete with logical errors and spare on source information and citations, but the author’s fatal error is a simple double standard: Why must science be scrutinized but his specific religious view be accepted without argument? That duplicity undermines Palmquist’s message and severely hinders his credibility.