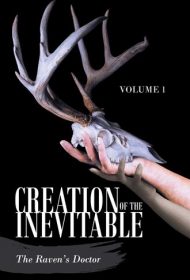 This novella centers on 17-year-old Malcom Doxon and the strange, fantastical world in which he suddenly finds himself.

Malcom is hospitalized with an unnamed, chronic ailment. When his girlfriend Denise visits him and crawls on top of him in the hospital bed, she crushes his fragile pelvis. He closes his eyes to take a nap and is transported, by Denise, to an alternative universe, where they live in a castle-like fortress. Denise, he learns, is really Death, and the two hunt deer around the castle. There, Malcom learns the ways of magic, when his controlling girlfriend isn’t using him as her boy-toy.

Soon, while stalking a deer, Malcom literally runs into a girl his age named Elizabeth, breaking her leg. He takes her to her village, where he meets the good Dr. Williams and starts learning the healing arts. The story ends on a bit of a cliffhanger, indicating a sequel to come.

The Raven’s Doctor, who, according to the book jacket, is “a young, aspiring writer,” sometimes delivers lovely prose, especially when describing the environs of the characters’ alternative reality: “A sky thickened by gray clouds and trees that wished to peek into the heavens…”

The story, however, lacks a strong conflict and believable character motivations. Transported to this weird world, Malcom quickly accepts the situation. He doesn’t seem to miss anybody or anything from home. Learning magic provides little challenge, as Death continually supplements his magic over time, making it easy for him.

Meanwhile, readers will puzzle over Malcom and Death’s relationship: Why is Death so obsessed with Malcom that she has a portrait of him hanging above her bed? And why does Malcom like her? Real chemistry between them seems missing.

Inconsistencies also distract. For example, Elizabeth’s village seems medieval, with chamber pots and so on, but, oddly, the character curses like a modern-day teenager.