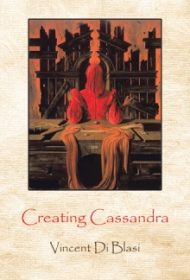 Joseph Giangreco, a writer with ties to organized crime living in 1990’s Boston, strives to recreate on the page the courtly love of the 12th century. For this he has discovered a muse: Cassandra, an ambitious, alluring businesswoman already indebted to him.

Giangreco’s unorthodox proposal is to devote himself to her as knights once devoted themselves (usually chastely and unrequitedly) to married noblewomen. Initially repelled by his suggestion, Cassandra grudgingly commences the role, treating her namesake character’s actions almost as instructions and the novel’s events as near prophecy (a nod to her mythical namesake). Eventually, the lines between art and life—even cause and effect—blur as both sets of would-be lovers confront power grabs and betrayals within their circles that threaten their very lives.

Di Blasi has a gift for memorable characters and snappy dialogue. For example, when Giangreco accuses Cassandra of murdering his best friend (and her husband), Sam, she responds: “I know you loved Sam like a brother…Abel did love Cane, didn’t he?” Additionally, Giangreco’s obsession with courtly love, even when it borders on masochism, provides him a provocative raison d’être.

Unfortunately, the novel’s central project gets somewhat muddled over time. There’s an obvious question of whether Giangreco is writing his characters or his characters are writing him. He feels that he’s simply recalling events as if from a past life, and some passages support this interpretation in a literal sense, but the explanation is hastily offered and never revisited. Similarly, most of the third act’s events rely critically on Giangreco’s organized crime connections, but for much of the story’s beginning, these connections are left mysterious and unclear—a choice that generates more confusion than mystery.

The story-within-the-story premise doesn’t quite fulfill its promise, but Creating Cassandra is intelligently written and literate. Readers will find that smart dialogue and audacious characters keep the pages turning.