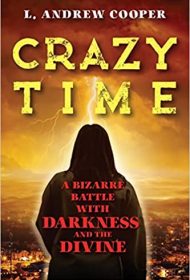 Not unlike a Dali painting, L. Andrew Cooper’s latest (after 2018’s The Great Sonnet Plot of Anton Tick) is a strange fusion of surreal horror, dark fantasy, and spiritual speculation that follows a confirmed agnostic woman as she attempts to find meaning in a seemingly unending inundation of tragedies that befall her like Job.

Lily Henshaw is an office manager at a print shop, but after being the sole survivor of a brutal attack on a secluded highway that left three of her friends dead, Lily’s life quickly becomes a living nightmare. After her brother David commits suicide, the small business she works for is vandalized and effectively closed, and a swarm of locusts appear in her bedroom. Lily begins to realize that God—or Satan—may be testing her in some way.

Aware that she may be insane and this entire journey pure delusion, Lily sets out to find answers. Her search leads her to a massive skyscraper in the city that may be the home to Satan, or God, or both. Once inside the building, she enters a hellish existence where anything is possible and every floor holds its own hellish surprises.

While this Twilight Zone-esque novel is powered by stunning imagery and laudable in terms of plot audaciousness (“She needed to kill God, who waited for them on the sixtieth floor”), there is a lack of narrative momentum throughout. The story has a meandering, serpentine feel and features many sequences that aren’t necessary to the main storyline. This negatively impacts the reading experience. A good example is a convoluted Coke commercial metaphor, which pulls intensity and momentum from the larger scene.

Happily, the focus and pacing improve exponentially towards novel’s end, and the author delivers a satisfying conclusion.

The Dali reference is fitting: This is a bizarre and at times grotesque narrative that, like the artist’s work, may turn off some of its audience while powerfully resonating with others.