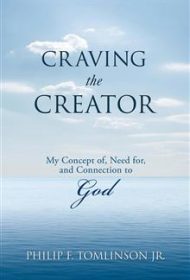 Philip F. Tomlinson, Jr., who holds an MS and PhD in plant physiology and a PhD in molecular and cell biology, is also a graduate (MBA) from Maharishi University of Management, where he now teaches biology and Transcendental Meditation. His perspective on seeking God, and the process thereof, is described in Craving the Creator, a fascinating synthesis of all these fields, as well as the fact that he was a devout Catholic during his youth and college years.

One doesn’t often have the opportunity to explore the mindset of a scientist who is also a person of deep faith and who embraces the Vedic principles and traditions of TM. The juxtaposition is fascinating (although his occasional lapses into scientific technicalities can be puzzling) and often charming. Each chapter opens with a poem composed by the author. So, in addition to impeccable prose, he shows us his creative, sensitive side.

The book’s structure is somewhat autobiographical, interspersed with instructional “sermonettes” on topics such as “Supreme Intelligence,” “Unconditional Love,” “Wonder,” etc. Throughout, Tomlinson leans heavily on the teachings of Maharishi Mahesh Yogi and his courses on Vedic Science, which the author says, “changed how I thought about God.”  Some of these concepts require concerted concentration to grasp: “In Sanskrit, attachment to the grip of the ego, feelings, intellect, and sensorial life accompanied by the detachment from pure awareness is called Pragyaparadh, meaning the mistaken intellect which looks outward so much that it neglects to look within and connect to the higher self, pure consciousness.” The takeaway, however, is worth the effort.

Tomlinson’s overarching theme is seeking to know God deeply. For those looking for a more traditional Judeo-Christian point of view, the emphasis on Maharishi Mahesh Yogi’s teachings would likely not be a fit. But those open to ideas and doctrines from a variety of religious beliefs would benefit from reading this book. And readers on a similar quest will surely find Tomlinson’s personal journey compelling.