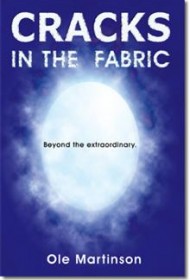 The back cover of Cracks in the Fabric promotes a notably different tale than what’s inside. It promises a thriller about an Australian journalist’s search for her missing daughter, who vanished from the hospital after being critically injured in a hit-and-run accident. The narrative implies that powerful forces may have been involved in her abduction.

While that somewhat reflects the story’s beginning, the book quickly turns into an over-the-top science fiction tale interspersed with a variety of political thriller elements.

The journalist, Carrie Storm, actually doesn’t search much for her daughter before being invited to cover a seemingly unrelated news event: a symposium put on by Magnus Xavier, the mysterious founder of LORAK, a powerful technology company. The vast majority of the book then focuses on LORAK and various conflicts related to its amazing technological advances, which include plausible innovations involving androids and nanorobotics–and fantastic ones involving mind reading, telepathy, and invisible force fields.

Cracks in the Fabric doesn’t lack for scope: It introduces readers to a number of colorful characters and breaks up the scientific pontificating with a good bit of action. However, it falls down in other areas. A minor but confusing issue is the name Magnus Xavier, which combines the names of two major X-Men characters. It’s never clear whether or not this is an intentional homage. Bigger problems include grammatical errors and dialogue that is consistently overwrought and unrealistic.

In addition, the characters and their actions often lack credibility. For example, right after Carrie’s daughter disappears, her boss assigns her to cover the story of the disappearance–and she agrees. No real news organization would direct someone to cover her own daughter’s near-death and subsequent disappearance, and no professional journalist would accept the task, much less a grieving parent. It’s unfortunately representative of an artificiality that permeates the book, making Cracks in the Fabric an unsatisfying read overall.