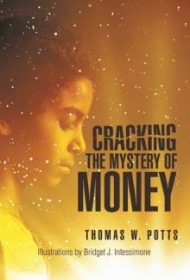 In Cracking the Mystery of Money, Thomas W. Potts presents financial lessons for young adults through the story of a young man and his mysterious colleague.

Just graduated from college, Devon Jordan returns to his regular summer job as a barista before deciding his next move. He especially enjoys working with the shop’s “master barista,” Pops, who always has something to teach him. Now, Devon particularly wants to avail himself of Pops’ reputed financial expertise.

Pops agrees to teach Devon the secrets of true wealth and gives him a book of fables to read and discuss. The stories involve concepts such as ownership, taxation and interest. Pops also possesses a magic chalice that can transport him and Devon through space and time. Using the chalice, they witness Muhammad Ali losing a boxing match through lack of discipline and preparation, the original “marshmallow test” (which tested children’s patience and self-control) and other scenarios illustrating personal qualities conducive to attaining wealth. At summer’s end, Devon convinces Pops to teach him the secrets of the magic chalice—with fateful results.

Potts imparts some valuable lessons in an accessible way. His distinction between being wealthy (having true control over one’s resources through ownership) and being merely rich (having “the trappings of wealth” but being indebted or otherwise insecure) is especially noteworthy, as are his warnings against becoming trapped in a cycle of debt.

The book’s narrative framework, however, detracts from these lessons rather than enhancing them. The fables sometimes drag and oversimplify their subjects (e.g., one suggests the U.S. is a pure meritocracy, rewarding only education, hard work and a positive attitude). The time travel passages are more successful, but often focus less explicitly on financial topics.  Perhaps most significantly, the story’s surprise ending is somewhat disturbing and seems to undermine the value of what Devon has learned.

In sum, Cracking the Mystery of Money contains useful information for young people but requires reconsideration of that material’s presentation to be more effective.