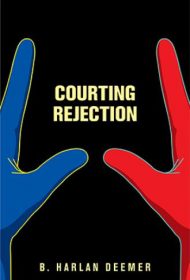 The 600-plus poems in B. Harlan Deemer’s Courting Rejection range widely, from intellectual meditations on religion and philosophy to intimate thoughts on the speaker’s lovers, friends, and family. The collection also ranges in format, from formal and free verse to lyric and narrative pieces and more.

Deemer has a sharp wit, exemplified by riffs like “‘Love and marriage/ Go together like a horse and carriage.’/ You can, of course,/ Just ride the horse,” and a broad, humanities knowledge-base, revealed by the scope of biblical, mythological, and historical allusions included in both his poems and myriad epigraphs.

Overall, however, the book is dense and lacks a thematic through-line. The most observable pattern is a tendency for the speaker to “think out loud” on the page, foregoing vivid imagery and concrete detail in favor of abstraction and exposition, as in: “How do you imagine hell?/ Think consciousness without its senses—/ no sight, taste, touch, sound, smell—/ only fading memories for present tenses.” The lack of specificity distances readers, rather than engaging them.

Additionally, poems are often confusing, lacking context. For example, “Dis Nuanced (wcw/ws)” begins: “One, nakedly, doctor, if this is the dawn,/ then it’s a sister planet, not a star:/ Two, its being seen keeps our point clearly drawn/ in a common sense of others, great or small, near and far…” Nothing in this poem’s content helps illuminate its meaning.

One laudable, anomalous poem, “I-196 Detour through Grand Rapids,” shows the poet’s potential. It offers clarity and rich, sensory detail. Here, the title and opening lines provide immediate context: “Somehow, driving at night in the rain/ feels like having died […]” Readers feel like participants rather than bystanders: “Counting each mile/ to reach the border,/ I veer right, rain stops. Order: […].” The last lines deftly personify the moon in a satisfying, visceral conclusion: “Then the moon’s thin smile/ appears in the west; red lightning flashes south;/ fears subside—residue in my mouth.”

Alas, such moments are rare in Courting Rejection, which requires revision to become a focused, accessible, image-centered collection.