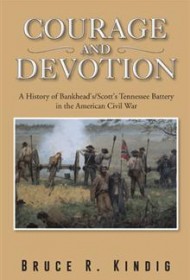 A cottage industry has arisen in the recent American Civil War literature, one that deals with the histories of individual divisions, companies, and even batteries. Often these studies are written by amateur historians whose interest has been sparked by a lifetime of travel to Civil War battlefields, or by their interest in military history. The books offer readers a local angle, as authors collect both detail (often excruciating in its minutiae) and lore about a hometown company, so as to save it from historical anonymity.

Bruce R. Kindig’s Courage and Devotion, the story of the First Tennessee Artillery Regiment Battery B—commanded by Captain Smith F. Bankhead, and then, upon Bankhead’s promotion, Captain William L. Scott—goes well beyond such parochial histories. Typical of the genre, Kindig includes short biographies of men who served in the battery. But this is no genealogical laundry list of privates and corporals. As his footnotes attest, Kindig is as well grounded in Civil War literature as any trained scholar. Moreover, he uses this literature to set Battery D into an admirable context. We not only learn where the battery fought, we learn about the times and the places in which the Tennessean’s interacted. (Particularly notable is a study of the city of Memphis as the nation entered the war.)

Kindig writes with a wonderful flair, a style that will entertain any Civil War buff looking to read about a particular battle. He also offers sober judgments: His view of the importance of the Battle of Chattanooga mirrors that found in the scholarly literature, and is well defended.

The book is not without its flaws (see BlueInk Heads-Up below). Still, those interested in the Civil War are encouraged to look past them. This is a well-written, thought-provoking, often exciting book, one that comes highly recommended.

BlueInk Heads-Up: The book receives a Star for its excellent narrative. Readers should be forewarned, however, that the reproduction of the battle maps—so important to any work of military history—is sub-standard, to the point that some cannot be read, and proper names are incorrectly indexed alphabetically by first name.