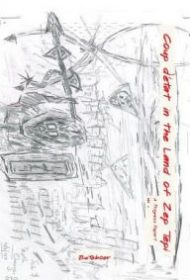 Coup d’etat in the Land of Zep Tepi is a confusing narrative that appears to be a loose amalgamation of fictional elements.

The story’s jumping off point is the prediction by the Mayan calendar of the end of the world, supposedly due at the conclusion of 2012. When doomsday is a no-show, the author embarks on a fitful, puzzling narrative journey.

The author, listed as the one-name Buiteboer, is sometimes the narrator here. Other times, Buiteboer is presented in the third person, and an unidentified narrator takes over. Finally, late in the book (or “report,” as the author calls it) the writing is assumed by Ghost Writer, who appears from nowhere, crushes Buiteboer’s skull in a fantasy confrontation and takes over the keyboard.

Characters include Story Hunter, or SH; author William Burroughs, who is a sort of tour guide/inquisitor in the author’s fevered imagination; a gentleman named Giovanni Nero and his paramour, Alecia.

While the sentences here can be tantalizingly evocative and inventive (“Then another scream bounces in slow motion down the throat of the Zambezi valley”) and the writing has force that shows the author’s potential, it’s nearly impossible to discern what Buiteboer is trying to convey. Broadly: SH disappears while looking to solve the riddle of a vanished African tribe that may have discovered the secret of Zep Tepi, an Egyptian creation myth. The author also throws in a Songo tribesman who shows SH where his ancestors built a tower to heaven; a tour of an afterlife city conducted by Burroughs, who gets into a bloody street fight with SH; and a mysterious memory stick with SH’s notes delivered via a DHL van.

The “report” ends with the narrator watching a dream Alecia is having, in which she meets the Egyptian goddess Isis. Like Buiteboer and Ghost Writer, Isis rambles, and what she says will be lost on readers. One hopes everything will be made clear in Vol. II.