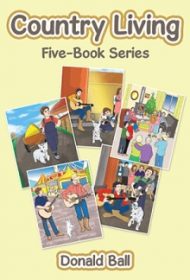 Ted loves his after-school job at a boat shop, and as Country Living begins, he aspires to build his own sailboat. Through hard work, saving money and scrounging for scrap supplies, Ted makes his dream come true. His parents, however, disapprove of Ted’s extracurricular activities. Wanting him to focus on his schoolwork, they order him to quit his job. In a huff, Ted sets out for his grandparents’ house farther in the countryside, where he is warmly received.

Although Ted’s parents live comfortably, his grandparents have struggled financially since “the crash.” Ted soon sets to work supplementing their income. He scrounges through garbage cans for leftover food, learns to play the guitar and joins forces with a street musician, and eventually starts his own lawn care business. Ted also makes friends at school and battles a serious illness. The book’s end finds Ted at a joyful Christmas celebration with family and friends.

Overall, the story is engaging and uplifting. Unfortunately, some missing quotation marks and comma splice errors, as well as inconsistent tense usage near the beginnings of chapters render the work less than perfect. Also, the illustrations by Nicola Lecciones have a clip-art look to them and sometimes depict anachronistic clothing styles (capri pants, modern-looking shoes, etc.) These illustrations undermine Ball’s generally successful evocation of the Depression era.

Readers who can overlook these problems, however, will be rewarded with a charming story. Ted is a plucky hero, and his can-do spirit and work ethic provide a positive example to young readers. He is something of a male counterpart to the protagonists of the various American Girl series.

Overall, Country Living is an appealing volume that should please early and middle reader audiences. New illustrations and a grammar touch-up would make it even better.