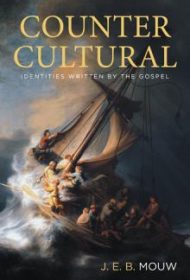 In Countercultural, J.E.B. Mouw confronts the difficult questions many Christians have about suffering, redemption, and how to act in a world that often is contradictory to the teachings of Jesus.

In a series of essays, the author provides in-depth examinations of Old and New Testament values to help believers find their “identity in Christ.” Mouw often shares poignant stories of his heartaches and troubles, including his battle with despair and mental health issues. As he mixes the personal with exegesis, he calls on readers to oppose the established ideals of modern day society: not to escape “culture” and live in “isolation” but to become “instruments of God” by living like Christ in an often un-Christ-like world.

Mouw covers numerous topics, including the roles prophets played in challenging cultural norms; Jesus’s Beatitudes, which call us to reevaluate our priorities; and the writings of Paul and their challenge to the status quo. At the heart of Countercultural is a rejection of relativism (the belief that there are no absolutes), which he calls “a denial of conscience.” Only through acknowledging that “God is the decisive agent in our salvation” and fully embracing Jesus, he posits, can we ever fully be ourselves.

Of course, choosing to live like this has its consequences and can lead to trouble, he notes, including feelings of separation or even persecution. Still, he believes Christians must trudge on, even if it means “standing alone.”

Mouw’s writings are thought-provoking and his ideas are well-argued. The material can be dense at times (his exploration of dispensationalism and Arminianism can be somewhat hard to follow) and there are occasional awkward sentences (“The spiritual transformations we’ve witnessed do not lie, even if only our own. Something inside us comes alive.”). Nonetheless, Countercultural is informative and revealing.

Christians looking for encouragement as they try to sincerely live out their values in modern society will find much to ponder here.