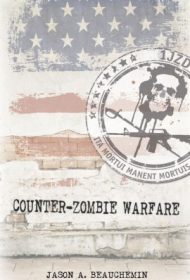 In this original take on the zombie genre, Jason A. Beauchemin forgoes details about the origins or initial outbreak of the disease that turns the dead into walking threats, focusing instead on the fight against the monsters.

Beauchemin announces the rules for the titular villains relatively early in the book: “Once a victim is infected, the only cure is two bullets to the brain,” he writes. The novel is told from the viewpoint of Fritz, a troop member in the 1st Joint-Service Counter-Zombie Ops Division (1JZD for short). The unit is tasked with “counter-zombie warfare,” or, more simply stated, blasting the monsters wherever they turn up.

As such, the novel recounts events under a decidedly military lens. This isn’t the formula of countless George Romero films featuring a ragged band of survivors navigating a post-apocalyptic landscape. As Fritz and his team take the front lines of a violent war, it’s just as much Full Metal Jacket as Night of the Living Dead, and Beauchemin’s own military experience (he’s an electrician in the U.S. Navy) informs the text.

The author writes in clean, impactful, authentic prose, and the story is steeped in the language, action and mood of the military as it recounts Fritz’s progression from a top-secret military training program to fighting zombies in the field. This is not for readers leery about blood and gore or prudish about curse words; the narrative is full of violent imagery and strong language.

Readers will also find that the military-speak creates some groan-inducing moments (“That final absurdity cut through the conversation like a tomahawk through a white man”). Additionally, Beauchemin is a tad heavy-handed in his use of military acronyms and tech-speak.

Still, the author’s departure from the standard zombie narrative is refreshing, and

even the abovementioned issues add to the feel of the story. Ultimately, Beauchemin’s novel, replete with vivid action, offers horror fans and military-adventure readers a unique narrative fusion they will appreciate.