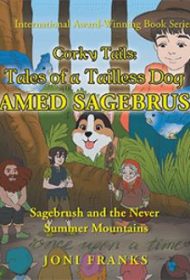 In Joni Franks’ seventh book of the Corky Tails series, the tailless dog Sagebrush and her friends go on a mission to save a village.

The Shuns, a group of tiny people living in the woods, are faced with the interruption of their village’s water source, the result of a landslide in the mountains that created a blockage of fallen trees. Two Shuns, Clover Leaf and Firefly, along with the human friend they call Young Miss and her dog Sagebrush, embark on a journey to restore the water flow.

In the process, they meet a hunter, who spots a giant Bigfoot-like creature called the Wooly Man. The hunter sets off to track the creature, but not before dismissing the efforts of Young Miss and her group as hopeless. “None of you are big enough to take on a task this size. You just don’t have the physical size necessary to clear a landslide,” he tells Young Miss with a snicker. Using teamwork, however, the group succeeds in unblocking the water flow, returning home to cheers and thanks, and a wedding between Clover Leaf and Firefly.

The text is full of vivid descriptions. Setting the scene in the Never Summer Mountains, Franks writes of its “lush natural meadows [..] bursting with skunk cabbage plants and chokecherry bushes and high-altitude water bogs that some say are inhabited by fairies.”

Such passages might prove challenging for some young readers, however, as will the long, dense text. Additionally, the Wooly Man is puzzling, as he actually looks just like a gorilla. While his story is left hanging, it seems that the foundation is being laid for future stories.

The illustrations are crisp and detailed. Unfortunately, they don’t always correspond with the text on the accompanying page.

Despite the abovementioned issues, Sagebrush and the Never Summer Mountains is an entertaining tale with lessons on overcoming naysayers and working with others toward a common goal.