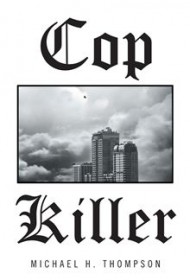 Gabe’s father dies in police custody in Multnomah County, Oregon, after suffering seizures from alcohol withdrawal. Gabe, a wealthy computer professional and former Army Ranger with an “off the charts” IQ, blames the loss of his father on the 12 deputies on duty at the jail that night.

A former black tar heroin addict, Gabe acquires weapons through connections from his drug-using days. A deceptive phone call and his computer skills get him into the police department database, which reveals the information he needs to track his quarry. From there, Gabe methodically kills each of the deputies. For a moment at the end of his killing spree, Gabe feels a twinge of remorse, but that doesn’t stop him from beating a polygraph exam and continuing his life as a vigilante.

Thematically, Cop Killer is akin to the gritty “street lit” of Donald Goines and Edward Bunker. But the story doesn’t live up to this pedigree. The book’s major flaw is its extreme brevity. Thompson squeezes an immense amount of action into a mere 42 pages of text. This compression leads to a simple, declarative writing style, which is often flat: for instance, “Gabe needed a bike. He could not buy one. It would have to be stolen.”

Gabe exhibits no real character traits besides intelligence and vengefulness. A single-minded, homicidal protagonist can sometimes be compelling, as in Christopher Buckley’s Wet Work, but Cop Killer offers no room for Gabe to earn the reader’s sympathy. Gabe’s skills – at reconnaissance, marksmanship, computer hacking and more – are so close to superhuman that the story holds no suspense. Fans of military fiction might find the most to like in Cop Killer, with its descriptions of tactics and weaponry, but those looking for a satisfying story will likely be disappointed.