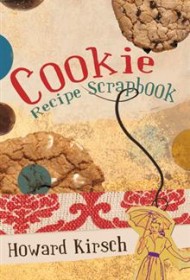 Howard Kirsch has raided the cookie jar for this collection of more than 575 recipes. According to the book, Kirsch, who was born in 1922, has collected some 52,000 general recipes over the years, but chose cookies as a tribute to his wife of 59 years because she always made “good cookies for the holidays.”

These are the kind of recipes that were probably torn out of newspapers and magazines the way most cooks do when they intend to try the recipe “someday.” It’s unclear whether that day ever came, because there are no personal notations save three pages of his wife’s favorite holiday cookies.

The recipes are from every conceivable source: magazines, cookbooks, the Internet, unfamiliar names (presumably friends or family), and companies such as Land O’ Lakes and Ocean Spray. They’re reprinted just as they appeared in the original material, although without photos. While it would have been politic for the author to obtain permission to print these recipes, there’s no indication of such an effort, although he does carefully acknowledge where they came from.

Kirsch has organized the book in the same random way cooks might file recipes in a box. While ostensibly filed alphabetically, the method is whimsical; instead of every cheesecake-related recipe being placed in the “C” chapter, for example, sometimes the author goes by the first letter of the recipe name. “Butter-Crunch Cheesecake Bars” are filed under “B,” for instance.

Due to this inconsistent filing method, and because of the sheer volume of recipes, it would have been helpful to have an overall index, so that readers could easily compare similar recipes, such as the myriad number of chocolate chips. Even Kirsch had some issues keeping track – a few of the recipes are printed twice.

Still, if you’re a baker, this is a collection worth paging through. It’s a comprehensive mixture of both the old and the new and an indisputably sweet tribute to Kirsch’s wife.