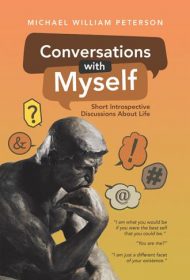 Author Michael William Peterson writes that the idea for Conversations with Myself came to him on a golf course, when, after a particularly bad shot, he found himself not only talking to himself, but answering as well.

Here, he expands on the idea by taking what he says are seven personality types—all reflecting parts of himself—and having them debate various topics. Each is defined by a certain trait: anger, humor, and so forth. And each has a separate name: Mike, Michael, Mikey, Dr. Mike, etc. The book is, he says, a “little attempt at introspection, human nature, quirks of individuals, anger, and humor.”

The author employs an odd conceit in these dialogues. Rather than presenting the characters’ comments in a script-like format, with the person’s name starting each entry, Peterson assigns a different typeface to each character. All the thoughts of anger-prone Mikey, for example, are represented in Arial Black. While Peterson explains that he made this choice to improve readability, it actually works in the opposite way: It’s hard to read and difficult to remember who is assigned to each typeface.

The conversations are presented in 20 chapters, each generally eight to ten pages long. The topics are fairly ordinary: television, road rage, taxes, professional sports, books, movies and so forth. No earth-shaking revelations or brilliant ideas are presented. In one discussion, for example, one personality announces “I just got back my DNA results.” Another responds: “Please tell me we are not from Cleveland.” And a third then says: “DNA results do not go with exact cities. What is wrong with Cleveland anyway?” The conversation then diverts to talk about Cleveland.

Peterson and his seven personalities come across as whimsical and affable (except for Mikey), but with an offputting format and mundane topic selection, it’s hard to pinpoint an audience for their discussions.