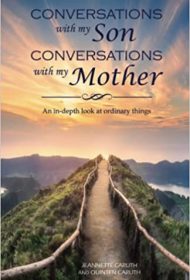 This wide-ranging correspondence between mother and son focuses on the wonder in the mundane and the rich rewards of the human experience.

Jeannette Caruth, the mother, is 70 and married. Quinten Caruth, the son, is 41 and single, with a few serious relationships behind him. Their primary emotional connection is with each other. The mother invites the son to write letters back and forth on various topics, “flowing from our mother-son entity into a kaleidoscopic landscape of our written thoughts, feelings and emotions.” He accepts, and the topics range from the quotidian (their daily routines, waiting, aging) to the existential (grace, dreams, tenderness, life).

Jeannette kicks off a subject such as “Intention” with a simple, straightforward story of waking up and groggily asking what the day may have in store and coming to the realization, “I want to feel joy today.” Quinten responds from a New Age perspective, ruminating on co-creation, surrendering to a Great Force, and “heal[ing] the world through the intentional purification of our inner states of being.” He often adds his original poetry.

The warmth and respect between mother and son gives this exchange an easy flow; it’s a pleasure to read. What it lacks in conflict or drama it makes up for in honesty and each person’s willingness to look deeply into something as bland as doing the dishes to (in the mother’s case) coming to the realization that a conscious decision to be aware brightens the drudgery, and (in the son’s case) to letting peace descend while his hands do something monotonous.

Nothing earth-shattering is discovered in any of their exchanges, but the calm pace and focus on each subject has the beneficial effect of allowing readers to fill in the quiet spaces with their own contributions.

In a world of hyper-frantic connection, this is a safe space in which to ponder the meaning of life.